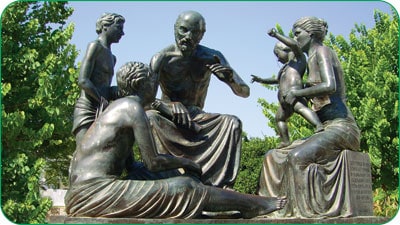 As a medical science, Thermology was first documented around 400BC by Hippocrates. He wrote “In whatever part of the body excess of heat or cold is felt, the disease is there to be discovered”. In his time, Ancient physicians of the Golden Age were known to employ a primitive form of Thermology where they would apply thin mud slurry onto their patient’s body. As the compound dried, patterns of hot and cold would emerge by different rates of drying.

The Discovery of Infrared

While the science continued to evolve with varying degrees of progress, the next really big breakthrough wouldn’t come until much later, when a scientist named William Hershel, experimenting with prisms to separate the various colors of visible light, discovered a measurable temperature change in each color of the rainbow, a pattern that extended to a curious place well past the color spectrum. Dr. Hershell had discovered what we now refer to as infrared. Infrared, meaning “below the red”, describes a specific span of the electromagnetic spectrum, which is a scale used to classify various forms of energy emission.

As a natural effect of metabolism, humans are constantly releasing varying levels of energy in the infrared wavelength.  This information can be expressed or measured as heat. 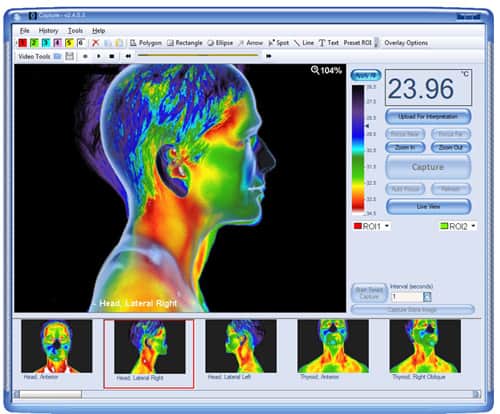 While Hershell’s and several other breakthroughs including Albert Einstien’s later theory of the photoelectric effect certainly helped to expand our understanding of the physical fundamentals of infrared energy, applied thermology didn’t really move into the arena of medical imaging as we know it today until the late 1950’s when U.S. military defense projects pioneered a new way to capture infrared (temperature) information by using electronic infrared imaging cameras. These modern devices revolutionized the science and quickly replaced many of the more primitive forms of temperature measurement such as contact thermometers and liquid crystal thermometry.

The advantage to these new imaging devices was that they could provide a way for physicians to instantly capture large arrays (images) of quantitative thermographic or temperature information. Within a decade or so of the technology’s release, the basic clinical principals of thermology were defined and several major clinical trials were under way.  In the image above, each pixel represents a different temperature.

In 1982, the FDA approved medical thermography as an adjunct screening tool in medicine. Today, modern Thermography is a highly refined science with standardized applications in Neurology, Vascular Medicine, Sports Medicine, and Breast Oncology, and many other specialty areas.

Until today, there has been no standardized, state of the art system used in thermography.  Northeast Thermography Medical Imaging Center is a Certified iScanHD Center.  Certified iScanHD systems have revolutionized the practice of medical thermography, using the most advanced high definition camera, and software by Total Vision.  iScanHD Centers has all scans interpreted by Physician Insight MD’s, a group of board certified doctors who have been trained to interpret thermographic studies.
This combination of high definition, patented state of the art imaging software and interpretation by Physician’s Insight MD’s has created the new standard of excellence.