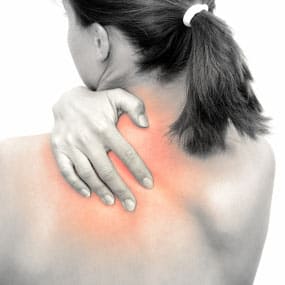 Fibromyalgia (fibrositis, myofibrocytis) is a chronic, painful muscle condition characterized by pain in the skeletal muscles, tendons (which attach muscles to bones), ligaments (which attach bones to bones) and other and bursa (sac-like structures which are filled with synovial fluid and provide lubrication and nutrition to joints). Recently, much has been written about this disorder in health magazines and newspapers. Although Hippocrates first described fibromyalgia, it has been only in the last few years that much attention (and credence) has been given to this syndrome.

Controversy and disbelief by the medical profession has been associated with fibromyalgia simply because objective evidence in the form of x-rays or biopsies can’t be found. However, with the use of thermography, or the measuring of heat produced by areas of the body, this syndrome is now more widely accepted by many, but not all, doctors.

TMJ: Many patients suffering with TMJ problems also sufferer with fibromyalgia. Unfortunately, many doctors (1) don’t recognize either TMJ or fibromyalgia or (2) fail to see the connection of these two pain syndromes. Fibromyalgia almost always intensifies the painful symptoms of TMJ and when one or both temporomandibular joints are dislocated, the pain of fibromyalgia in the neck and upper back is greatly magnified. Both TMJ and fibromyalgia produce similar painful symptoms in the muscles of the neck, shoulders, back, face and head as well as often causing dizziness.

Irritable Bowel Syndrome: Nearly half of all patients with fibromyalgia have frequent bowel cramping, severe diarrhea, and severe abdominal pain.

Depression: As with most conditions which produce chronic pain, depression is a common problem with fibromyalgia. Common depression symptoms include a feeling of low self esteem, helplessness, hopeless-ness, poor appetite, loss of sexual drive, sleeplessness, frequent crying, and basic lack of interest in life.

Anxiety Disorder and Panic Attacks: Often, those afflicted with fibromyalgia also experience extreme anxiety and panic attacks, especially at nighttime. They may awaken in terror with their heart beating rapidly, their chest feeling tight with a feeling as if breathing is impossible. The patient will be convinced that they are going to die. There are many causes of such attacks, and perhaps alterations in certain body chemicals produced in excess with fibromyalgia may be one cause.

Concentration and Memory Problems: Like those suffering with severe TMJ, patient with fibromyalgia often report difficulty in thinking and even remembering. They often forget where they’ve parked the car at the mall, for example. Simple facts and numbers are often forgotten. Understandably, great frustration often accompanies these memory problems.

Irritable Bladder: Those with fibromyalgia often complain of frequent, painful urination. Although they feel as if their bladder is infected, urine and blood tests are negative.

Fibrocystic Breast Disease and Endometriosis: Although there is no known explanation (yet!), both fibrocystic disease of the breast and endometriosis are often seen in women with fibromyalgia.*

Disclaimer: Northeast Thermography Medical Imaging Center is not a treatment or diagnosing center. The information at this website is for general information and resource purposes only and is not intended in any way to be a substitute for professional medical advice, diagnosis or treatment. Thermography is not an alternative to Mammography.

Lower back pain is the most troublesome back pain for patients and can often be very difficult to treat. The hottest white areas in these images indicate the most intense inflammatory response. Thermography is very useful to help find the source of the pain. The patient below suffers with Sciatica, and the source is clearly in the lumbar area. The image below clearly indicates the intense inflammation in the spinous processes of the lumbar spine. These areas are a major source of radicular pain, especially into the hips, thighs and legs. Often the patient will report intense pain the hip or leg, either bilateral or unilateral, and there will be no thermal indication in the hip or leg images, but the hyperthermia in the lower back will be the source. Many lower back thermograms will reveal significant thermal indications at the L-3 L-4 region, with varying degrees of associated muscular inflammation, as this is typically a very weak spot in the spine.

Sciatica is a symptom. It consists of leg pain, which might feel like a bad leg cramp, or it can be excruciating, shooting pain that makes standing or sitting nearly impossible.

The pain might be worse when you sit, sneeze, or cough. Sciatica can occur suddenly or it can develop gradually. You might also feel weakness, numbness, or a burning or tingling (“pins and needles”) sensation down your leg, possibly even in your toes. Less common symptoms might include the inability to bend your knee or move your foot and toes. These scans show sciatic nerve inflammation.